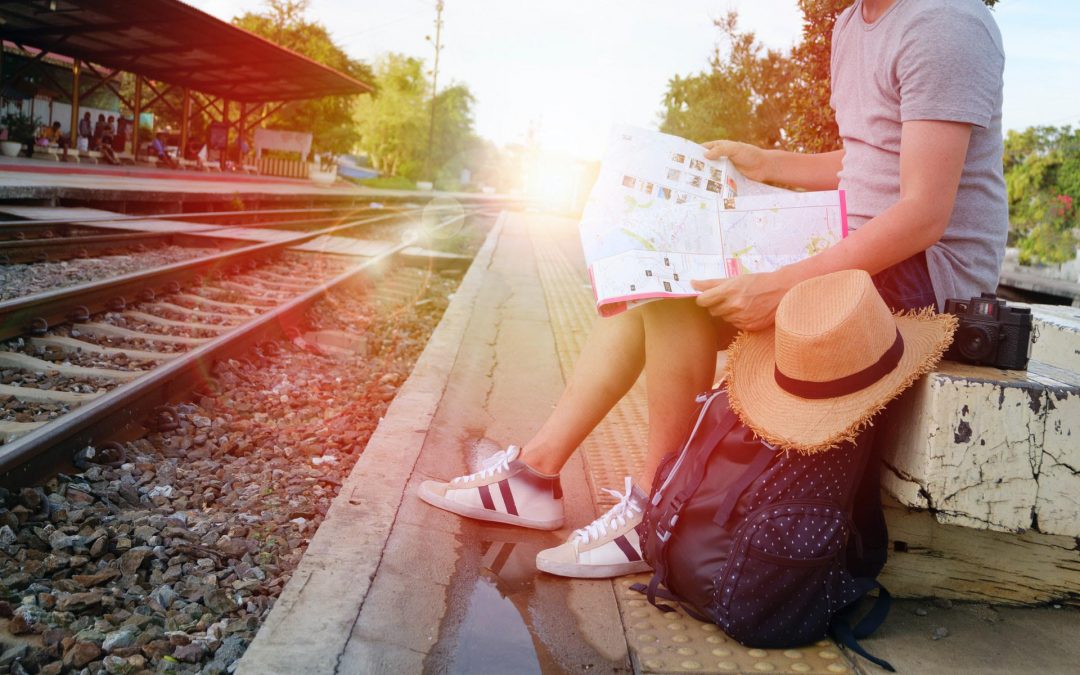 Our guide for curious tourists Sicilia Tour has the ambition not to leave anything out.

We’ll give you tips on how to book your flight and hotel on the Mediterranean’s largest island.

Imagine a 15-day trip to Sicily trying to maximize the time to explore it to the fullest.

Travel planning, advice, stages, main destinations, how to get there, how to get around, where to go and what to do in Sicily.

The ‘pearl’ of the Mediterranean is the pick of trips to southern Italy in your 202020 vacation plan and that of many other tourists.

Sicily smells of its thousand-year history, of Greece and Africa, of Byzantium, Arabia and the Norman world. It is not only the largest region in the Boot.

Ancient Trinacria must be explored thoroughly, unveiled on more than one tour, on many journeys of discovery of its Greek temples, Byzantine mosaics, Arab architecture, and Norman art.

Every corner of it tells of splendor, tradition, culture and wealth.

What is the best budget hotel booking site in Sicily?

If you only want to book a hotel or B&B because you intend to travel by car, we recommend booking.com or trivago.it. By typing ‘Sicily Italy’ into the search engines, you will find the best hotel offers in Sicily.

If, on the other hand, you are looking for an all-inclusive package flight + hotel and you want to plan your trip in a simple, fast and convenient way, take a look at Tripadvisor or on Skyscanner, Expedia, Edreams, Volagratis. These are price comparison sites. They allow you to choose the best one, book quickly and perhaps even request a rental car.

In short, a guide for planning Sicilian holidays can give you, in economic terms, one of these sites.

In case you are looking for particular Sicily tour packages, a tour of attractions in Sicily or luxury travel, there are online travel agencies that organize tours for groups and individuals .

Sicily travel guide: when to go

For a trip to Sicily, every season of the year is good, even if the most suitable months are those between April and October. This is because the months between October and February (autumn and winter) are the rainiest.

The mild climate in spring and autumn allows you to swim and visit the sites of greatest interest without suffering too much from the heat.

In Sicily, in the summer (especially in August) the beaches are literally invaded by hordes of holidaymakers and prices soar.

Sicily, the pearl of the Mediterranean, is so full of history, enchanting beaches and evocative natural landscapes that, to tell it all, a guide is not enough. Just as the classic summer vacation is not enough. There is so much, too much to visit and admire. The only solution to this surplus of natural beauty is to organize a Sicily Tour, perhaps to be repeated in various stages.

You could plan a vacation to the eastern part or the western part. Let’s try.

Sicily tour in the western area: itineraries and main destinations

The north-west part of Sicily represents an area of ​​particular value on the island.

Among the tourist destinations not to be missed in the western area of Sicily we find:

– Palermo, the Baroque capital of the region. In this city you cannot miss Palazzo dei Normanni, the Cathedral of Palermo and the royal tombs, the Teatro Massimo, the Palatine Chapel, the Martorana church, the Catacombs and the local markets;

– Trapani, thanks to its enchanting and crystalline sea and its naturalistic areas. Of the historic centre, we recommend the Hundred Churches and Palazzo Senatorio. Don’t miss the Clock Tower and the Purgatorio church, the Castello del Mare, the Colombaia Tower, the Ligny Tower and the Saline Museum either;

– Marsala, the city of wine, with one of the most suggestive stretches of coast. In the historic centre, the Mother Church, the Museum of Tapestries, the historic buildings, the Insula Romana, the archaeological park are worth admiring.

We cannot overlook the Egadi islands (in particular, Pantelleria, Lampedusa and Favignana) similar to Caribbean paradises, or the archaeological sites of Segesta (with the Doric temple and the Greek theatre), Selinunte (with its Cusa quarries) and Agrigento (Valley of the Temples), the enchanting historic villages of Cefalù, Sciacca, Erice.

In Agrigento, in particular, we were very impressed by the Scala dei Turchi, a white limestone cliff that has real steps.

Those who aim for holiday spots will find what they are looking for: San Vito Lo Capo, Scopello and Castellammare del Golfo.

The Foce del Belice reserve, the Zingaro reserve or the Madonie park are perfect for those who love nature.

Sicily Tours in the eastern area: itineraries and main destinations

The south-east region of Sicily is equally fascinating and evocative.

You can visit important cities such as Messina, Catania and Syracuse.

Messina should not be considered simply the main point of arrival for those arriving by ferry. It is worth visiting the historic center and the Cathedral, the Astronomical Clock and the Orion fountain, the Vittorio Emanuele II Theater. The obligatory stops in Messina, for those who can afford them, are Taormina, which boasts an immense historical and archaeological heritage, and Giardini Naxos (don’t miss the museum). To admire the Aeolian Islands (or Lipari) properly with their two active volcanoes (Stromboli and Vulcano), you need a separate tour.

Catania offers city beaches such as Praiola di Giarre, and Foce Simeto but, above all, Baroque monuments. Visit the cathedral of Sant’Agata, the Bellini Garden, the underground and the Museum of the Landing, Acitrezza with the eight Faraglioni of the Cyclops and the island of Lachea.

In the city of Syracuse we recommend you to explore the island of Ortigia, the historical part (Duomo, Tempio di Apollo), the port to then move towards the Greek Theater, the Amphitheater Roman and the Maniace castle.

Last but not least, the splendid landscape of Etna, the coastal areas of Capo Passero and the island of Correnti.

Noto, near the Vendicari nature reserve, is a UNESCO World Heritage Site but is also referred to as the capital of the Baroque.

Among the various beaches, we recommend that of Letojanni and Bella (Taormina), Calamosche and Marzamemi, Punta Asparano (Syracuse) and the Foce del Simeto (Catania).

The Tour in Sicily can continue to Enna and Ragusa.

Enna is nicknamed ‘the navel of Sicily’, it is the heart of the island.

It is the only Sicilian city that does not have access to the sea. On the other hand, it boasts the largest number of lakes, including Lake Pergusa (the only natural one).

It is located 900 meters above sea level and offers various places of interest, in addition to Lake Pergusa:

Even Ragusa has a nickname, or rather more than one: ‘the city of bridges’, ‘the island within an island’, ‘the other Sicily”.

After the post-earthquake reconstruction of 1693, it was divided into Ragusa Superiore and Ragusa Ibla.

It is one of the most important UNESCO sites in the world. It holds treasures: archaeological finds from the Greek age, ancient rural traditions, Baroque architecture flaunted by churches, palaces and alleys.

Sicily Tout: How to get to the Trinacria Island?

In the search engines you entered ‘Sicily airport transfers Italy’ and also ‘car transfers Sicily airport’. You cannot find the answer you are looking for.

Perhaps you entered the wrong keyword, maybe you don’t have the patience or desire to search.

Probably, you are confused and have not yet decided whether you want to go by car or by plane.

We’ll explain how to get to Sicily in all possible ways.

The fastest way to reach the pearl of the Mediterranean is by plane.

There are two airports on the island:

– Falcone-Borsellino of Punta Raisi which is 32 km from Palermo;

The first, Palermo airport, is connected with direct flights to the main airports of Italian cities (Naples, Turin, Venice, Milan, Bologna, Pisa, Rome). As for the Catania airport, the connections are similar.

Once you arrive at the airport, finding a taxi in Sicily won’t be a problem.

If you want to travel by train, the railway lines connect Milan, Florence, Rome, Naples and Reggio Calabria to Messina and from there to Palermo, Catania and other Sicilian cities. Trains are transported from the peninsula by ferry from Villa San Giovanni. The fastest, punctual and most expensive are the Eurostar trains of the Intercity.

By land it is also possible to use buses: the best-known company that manages connections from Rome or Naples to Sicily is Interbus.

If you want to travel comfortably with your car, with the A3 Salerno-Reggio Calabria you can reach Villa San Giovanni, where the ferries leave for Messina.

The island can also be reached by sea:

– with the hydrofoil service that connects Messina to Reggio Calabria.

The price of tickets increases between June and September and it is advisable to book them well in advance.

Once you set foot in the Sicilian city to visit, you ask yourself: is it better to rent a car or motorbike or travel by public transport?

Public transport in Sicily is complicated and time consuming.

Connections between the main cities and tourist resorts are good. However, if you choose less traveled paths, you may encounter difficulties.

Trains are slow with limited services but are preferable to buses if traveling between major Sicilian cities. They are slow but cheap and, in any case, reliable.

The trains that service the circuit of Etna are not managed by Trenitalia but by Ferrovia Circumetnea, a private company.

Connections with the islands off the coast are guaranteed by an efficient system of ferries and hydrofoils. Services decrease significantly in winter.

Pantelleria and the Pelagie Islands are best reached by plane, which is cheaper and faster than the ferry.

Flavors and specialties of Sicily

One fine day, you got up and decided: “Destination Sicily”. For its scenic beauty, the sea, the history, the charm, the mystery, the sense of hospitality. Also for its specialties to be savored on site.

This land is tempting. The flavors of Sicily are a triumph of taste.

When organizing a Sicily Tour it is impossible not to dream of the island’s specialties.

The list of the Sicilian menu is long but we will try to limit ourselves:

– pasta with sardines or with tenerumi (sprouts of the long courgette plant);

– cardoons and artichokes dipped in batter and fried;

– panelle made with chickpea flour;

Let’s stop here even if there is much more to list.

Sicily Tour: What to do in the Sicilian Island?

There are several things to do in Sicily, in addition to enjoying the beaches, the flavours, the history and the architecture.

Among these, participating in traditional religious festivals and events in general, the most important religious festivals are the one dedicated to Sant’Agata (February, Catania), Santa Lucia (Syracuse), the Living Nativity of Custonaci, the Feast of Santa Rosalia in Palermo (which ends on the night of July 14),

On the lay side, we point out these events:

– Pirandelliana Week in Agrigento in July/August, with theater performances, ballets and operas;

– Almond blossom festival which takes place in the Valley of the Temples in Agrigento in the first ten days of February;

– Carnival of Acireale, one of the most spectacular on the island;

– Festival di Morgana, between November and December, with the famous Sicilian “puppets”.

Bon appétit, have fun and enjoy your journey to discover the goodness and beauties of Sicily.

Hi I’m Iolanda, In 2010 I decided to return to my magical island, Sicily, so that the experience gained in previous years would take shape there where I was born. 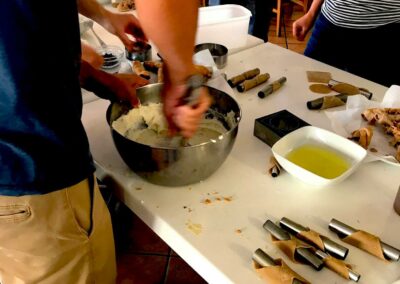 What to do in Cefalù 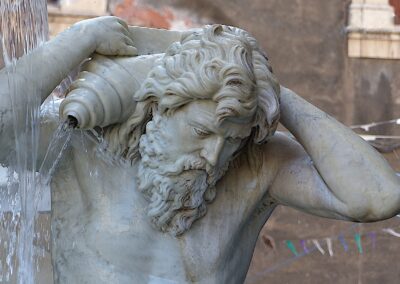 What to see in Catania 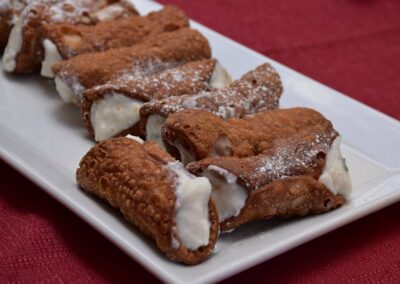 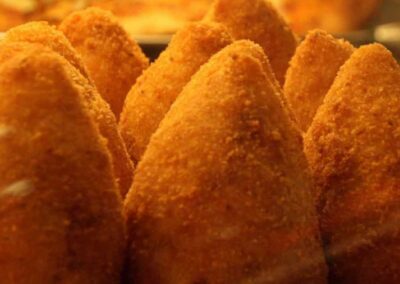